Bob Barnes, the New York man who is cycling to all 50 U.S. state capitals in one year, has found another favorite city: Indianapolis, Indiana, where he noticed kindness as a common “theme.”

Barnes, 52, of Syracuse, New York, visited Indianapolis — the 37th capital on his journey — on April 19.

Barnes said he particularly loved the “vibe” in Indianapolis.

“You’ll see some little [acts of kindness] in big cities, but not a theme,” Barnes said.

Yet in the Indiana capital, he said, “It’s a theme, that’s what it is — a theme to be kind in Indianapolis. And they express that.”

Bob Barnes is cycling to all 50 state capitals in one year. He arrived at his 37th capital, Indianapolis, on April 19, 2022.
(Bob Barnes)

Once Barnes arrived in the state of Indiana on April 18, 2022, he was almost immediately recognized by a couple who stopped to talk with him.
(Bob Barnes)

Other than the kindness that Barnes felt from others in the capital city, he described Indianapolis as an accommodating place.

“It’s easy to get around, everybody’s friendly, everything is modern,” Barnes said.

Barnes said that kindness was something of a theme that he picked up in Indianapolis amid his bicycling travels.
(Bob Barnes)

Bob Barnes also found the city of Indianapolis easy to get around and “very accommodating.”
(Bob Barnes)

Barnes appreciated the architectural appeal of the capitol building, which stands in the heart of the city.

“Usually the capitols have sprawling lawns and things like that,” Barnes said.

“In Indianapolis, it sticks out because it’s old and big and it’s beautiful, but everything else around it is these big, tall, modern buildings.”

“They encourage kindness … everywhere you turn.”

Though Barnes is usually in and out of the capital cities, one of his Facebook followers booked him a hotel room for the night in Indianapolis.

That gave Barnes more time than usual in the city itself.

That night, Barnes went to a nearby restaurant and had a beer and a shrimp cocktail — one of his longtime friends treated him to the meal.

“People [who visit] my blog are becoming even more kind themselves,” Barnes said of his followers who frequently offer to pay for his meals or an overnight stay.

The capitol building in Indianapolis stood out for Barnes, because it didn’t have “sprawling lawns” like a lot of other state capitols do.
(Bob Barnes)

Barnes spent the night in a hotel in Indianapolis and was even treated to a shrimp cocktail by one of his followers.
(Bob Barnes)

Another spot Barnes took a liking to was the town of Franklin, which he said was his “favorite” place in the state aside from Indianapolis.

Franklin is located roughly 20 miles south of the capital. It’s the site of shops, eateries and Victorian mansions.

“That was a really nice, quaint [town] — one of those small-town America towns that was really nice,” Barnes said.

A favorite place for Bob Barnes in Indiana was the town of Franklin.
(Bob Barnes)

“It was inviting, it was comfortable,” Barnes said of Franklin, Indiana. “People were smiling.”
(Bob Barnes)

The town was inviting and comfortable — and offered a lot of interesting history, according to Barnes.

“They were waving at me through the windows of the restaurants. That doesn’t always happen,” he added.

Though Barnes loved the cities in Indiana, he said the state still didn’t rank high among his favorites of Mississippi and Ohio (two states through which he cycled in March and then April).

“Indiana is very friendly, like most states,” Barnes said. “People are very outgoing and nice.”

“It’s very Midwestern, in the sense that it’s very open,” he added. “It’s a nice place to go for a Sunday drive.”

A mural in Franklin, Indiana, is pictured here — yet another one of the many photos Barnes shared with Fox News Digital from his cycling travels.
(Bob Barnes)

Barnes took this photo as well of a theater in Franklin, Indiana.
(Bob Barnes)

When he arrived in Indiana on April 18, Barnes had a positive interaction with a couple who were driving through the state from Wisconsin. They recognized him from a local news story.

“That was a nice introduction,” Barnes said. “Even though they weren’t from Indiana, it was nice to experience that coming into a new state.”

In fact, more and more people are starting to recognize Barnes — something he said “feels very natural” now to him.

“It does give me a boost, and it makes me smile,” he said.

In general, Barnes considered his ride through Indiana “uneventful” — which lends itself to biking across an entire state.

“[Uneventful is] always a positive thing, because we’re moving forward and nothing bad has happened,” Barnes said.

Barnes snapped a photo of this vintage car in Franklin, Indiana.
(Bob Barnes)

“It’s exciting, it’s recreational,” Barnes said of the rail trails in Indiana. “It makes travel easy. And it’s nice to see people out there utilizing them.”
(Bob Barnes)

Barnes was able to ride more miles per day thanks to the state’s manageable riding conditions, longer days, fewer hills and more rail trails, he said.

And when he wasn’t on rail trails, he said Indiana drivers gave him plenty of room on the road. That was in contrast, he said, to the drivers he encountered in Virginia and Georgia, where Barnes had close calls, and in North Carolina, where his trailer was hit.

“Not that they’re horrible, but they’re not used to seeing cyclists and don’t know how to act,” Barnes said.

Barnes said he’s trying to “up the miles” daily, in anticipation of the ride through Canada — “in case we hit some mountains,” Barnes said.

“[Uneventful is] always a positive thing, because we’re moving forward and nothing bad has happened.”

Barnes had some pleasant weather during his ride through Indiana, except for the first two days when it was windy and cold.

Barnes was able to make up some extra miles in Indiana because of the ideal riding conditions. He took this image of a sunset in Indiana.
(Bob Barnes)

Aside from some of the towns and cities he went through, Barnes told Fox News Digital that there was a lot of open, empty country roads in Indiana, such as the one pictured here.
(Bob Barnes)

“It was tough,” Barnes said, referring to the low temperatures.

“I don’t think I was prepared,” he said. “And I was a little disappointed in myself because I’ve been through much worse and I was trying to be mister tough guy … and it got me.”

Next stop: The Great Lakes State

After Barnes left Indiana on April 23, he arrived in Michigan, heading to his 38th capital, Lansing.

While he was still in Indiana, Barnes said he was most looking forward to riding along Lake Michigan.

“It’s a great feeling,” he said of the milestone. “I’ve said this before, but I can really see the finish and I’m confident it’s going to happen, that we’ll be in Juneau by August 1st.”

Barnes explained earlier that he plans to bike to Juneau, Alaska, after taking a ferry from Canada.

And he’ll bike to Honolulu, Hawaii, after flying with his bike to the island, he previously told Fox Television Stations.

Fox News Digital has been following Barnes’ journey across America and detailing it for readers in this unique Lifestyle series. To catch up on — or enjoy once more! — his previous three trips before the one described here, read more below:

NY man cycling to all 50 states faces bull on the loose in Kentucky: ‘Imminent danger’

NY man cycling across America falls in love with Cincinnati 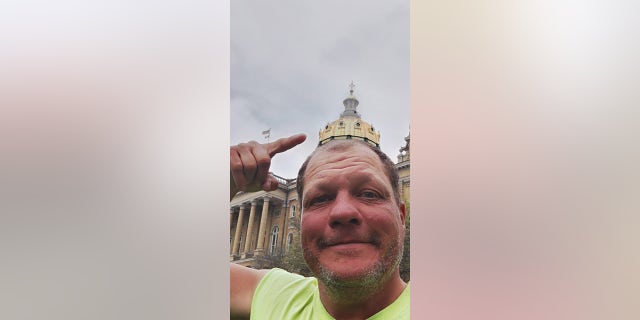